The group was represented by Jim Engel, Deb Sprecker and was moderated by Tim Reinders, a design consultant with the company. The trio mentioned they’ve never been to Humboldt before, so they spent Wednesday acclimating themselves with walking and driving tours through the city.

Reinders wanted made sure the public in attendance knew that he and the other developers were not going to be talking at the public, but instead, compacting what the public said to them.

“You guys, the residents, you’re the experts, we just synthesize what you tell us” Reinders explained.

The group had six prepared questions for the public which included:

Most of the public response centered around developing new business within downtown Humboldt.

Citizens voiced concerns on the lack-off specialty shops, saying Humboldt is losing business to Fort Dodge for not having specialized stores, such as men’s wear shops, shoe stores and sporting good stores.

Others voiced that while creating new business opportunity is a good idea, focusing on growth from within might be a solid option as well.

“We need to focus on our businesses that exist already in downtown Humboldt” one woman shouted, “they’ve stuck with us, we need to give them some incentives.”

Residents also thought that city needs to better leverage it’s advertising reach, as well. That includes traditional forms of marketing such as local radio and newspaper, but also IPTV. Residents agree that city signage needs to be transformed in order to create a more welcoming entrance with signs that create and capture the ambiance of downtown Humboldt.

Others cited the need for protection from the sun and other elements when shopping as reason to keep them, most of them-however-agreed that the canopies need to be updated or maintained with some regularly to keep them looking fresh.

“We have done enough of these, where we start to see common themes, but what’s different is the nuances or the details” Reinders said.

Reinders spoke to the ease this case may bring, especially with the high turnout, he said there was a lot of great ideas.

“Bigger isn’t always better” Reinders exclaimed, ” I really do think everyone had their chance to talk.

Meetings will continue again today at City Hall, culminating with the report analysis Friday at the Council Chambers at 12:00pm. 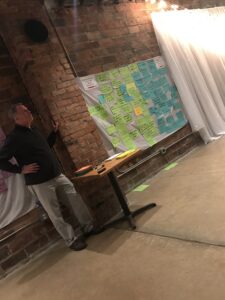