Humboldt, Iowa – What might have looked like mass chaos at the Humboldt County Fairgrounds Thursday afternoon may have just been a simulation, but the concerned and otherwise downcast looks on Humboldt High School students leaving the Grandstand may have proved otherwise.

In partnership with Humboldt County Fire and Rescue, the Humboldt County Memorial Hospital, the Iowa State Patrol, and Mason Lindhart Funeral Home – as well as many others-  the Humboldt Law Enforcement Center flawlessly executed the “Every 15 Minutes” program Thursday afternoon.

The program, which highlights the perils of drunken and distracted driving is a heavy-hitting, in-your-face reality check on what could happen in a scenario such as Thursday’s.

In Humboldt the event was the first of it’s kind. Uniquely, the idea was born from conversations Humboldt Deputy Sheriff Cory Lampe had with friends from Emmetsburg last spring.

“Back in April [of last year], I bumped into friends and they had just completed the second day of the Every 15 Minutes program” Lampe said.

“The parents were just exhausted, they said it was a very intense two days, but they learned a lot from it and said it was extremely impactful for the students and themselves.”

The event was extremely secretive to many, if not all students, outside of the twenty-one picked at random to act in the simulation.

Sixteen students were taken out of Humboldt High School classrooms every fifteen minutes on Thursday morning by the grim reaper to signify the namesake of the project.

Five students were selected to participate in live performance at the Humboldt County Fairgrounds on Thursday, with multiple students being severely injured at the scene including some even perishing.

“It hits home for a lot people, it makes you realize an accident like that could happen to anyone at almost anytime” Courtney concluded.

According to Humboldt Police Officer Erin Bennett, that was exactly the goal.

“We wanted them to learn there are consequences for every action, we want them to understand that even if they are not driving, their lives can change because of the actions of someone else.”

The program ran at Atlantic High School on Thursday as well. 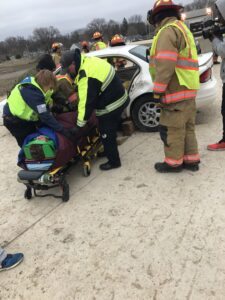 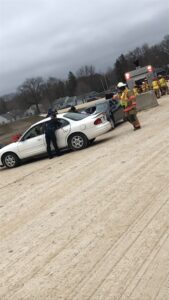